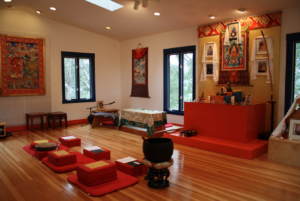 Intentions: Perched high on a ridge in the Coastal Hills of California, the retreat center was in need of both rehabilitation and new design and repair.   A previous owner had built a back deck that covered the vents on the back side of the house, causing the floor supports to rot in that area.   Furthermore, after years of enduring strong winter storms and crackling hot summers, and with the ever present threat of wild fires, the center was in need of some aesthetic refurbishment,  fire abatement strategies, and new facilities to better accommodate retreat participants.

General Challenges: Despite a good amount of acreage, most of it was too steep to build on.   The buildings, along with the outbuildings, septic systems, and leach lines, all had to be configured in a way to maximize the usable area while still maintaining a sense of spaciousness.   Additionally, much of the sleeping accommodations where provided by yurt structures, which are beautifully visually and affordable, but also heat up to an uncomfortable temperature if they are placed in the direct sun.   With only 3 standard sized bathrooms in the main house available to the retreat participants, the bathrooms had been a problem for years.    During rains, the dirt paths linking buildings became treacherous.    And overall, the place was a bit ramshackle, each new wave of building, repair, and neglect creating a hodgepodge of structures in various states of upkeep.

General Strategies: We began working on the main house, pulling out the back deck and replacing the rotten floor beams.   We redesigned both the back and the front porches with a more durable composite decking material that could endure the harsh ridge top weather and added an sauna and outdoor shower.   The yurts were placed strategically within the oak forests to take advantage of the shade their.   We used flagstone to improve the function of the paths, and replaced a dangerous old outdoor staircase made of railroad ties with a beautiful new one out of the same composite decking material.   A much needed firebreak was created between the heavily vegetated slopes surrounding ridge top and the building themselves.  All the building, including the presiding teachers house, shrine room, main house, and yurt porches, were further unified using a fresh coat of paint, deep red with brown trim.

Do you want your project to reflect the designer's vision or your own? DOWNLOAD NOW

Good design should never be taken for granite . .

This kitchen remodel is one of our favorites. The

Trusting someone with your kitchen remodel is whis

You don't have to sink your life savings in a remo

The chef who makes family meals here is a really k

We will review your request and reply within one business day

The simple secrets to getting the home you want while avoiding costly revisions and other frustrations.

We only send you awesome stuff!